Back in the spring of 1935, three daughters were born to Mr. and Mrs. Jesse Ross Copple, who were Oklahoma natives living in Arizona at the time.

I believe this Jesse Ross was married to Mary Elvira Goins, and was kin to me through both my Copple and Wright lines. His 3rd great-grandparents were Jacob Peter Copple and Mary Elizabeth Garren (or Fouts). Their son Jacob Peter Copple married Elizabeth Wright, who was also kin to me, being the granddaughter of Richard and Ann [- ? -] Wright, my 7th great-grandparents.

The likely family tree of these triplets, my distant cousins, is below:

I have recently created a Copple surname group on Facebook for persons interested in DNA, genealogy and researching their Copple kin. This private group is all about connecting with folks who have a Copple line in their family tree, and trying to tie DNA test results to that Copple branch. Variant spellings include Copple / Cople/ Cobble/ Cauble/ Capple / Gobble.

If your DNA/genealogy interests or your family tree branch includes Copple, please consider joining! You can check it out here.

Lucile McDonald, a native of Collin County, Texas, married Earl Harold Copple in Kerr County, Texas (in what is known as the Texas Hill Country) on 17 February, 1941. She was 24 years old.

Her husband Earl was 32 years old and also a Texas native, being from Kimble County (adjacent to Kerr.) Earl was one of 10 children and the youngest son born to Virgil O. and Rosa (McDonald) Copple. Earl may be related to me twice over, as his paternal grandparents were cousins in some degree.

The bride was married in blue, with a corsage of pink carnations.

Beulah Elaine Copple, daughter of Henry Ellis Copple and Julia (Williams) Copple was possibly my 4th cousin 4 times removed (a descendant of Nicholas Copple who died in 1808 in Rowan County, NC, and his wife).

The wedding notice ran to two columns, and was quite detailed about what the bridal party wore.  Here is only the first column.

In the midst of this current coronavirus epidemic, I wondered if any of my distant Copple kin had suffered from influenza during the 1918 pandemic.  I know my great-grandmother’s brother, George Englehart, was a victim of the 1918 flu; his mother was a Copple.  But that’s a separate story.

A search on newspapers.com brought up little 8 year old Clifford Copple dying in Nov 1918 in Coos Bay, Oregon.  He was my 4th cousin 3 times removed, twice over.  Born to William Alonzo and Frances R (Center) Copple, he had two sisters and four brothers.  A number of his paternal extended family lived in the area, originally coming to Oregon by way of Washington, Illinois, Missouri and Indiana.

Clifford apparently suffered from influenza in the fall of 1918 — which would have been during the “second wave“.  (So it is quite possible — but unknown — if members of his family had it as well.)  However, he recovered, and then came down with meningitis, which was fatal to him.

Little Cliff’s death (and possible illness of other family members) probably wreaked havoc on William and Frances’ marriage.  As of the 1920 census (on April 1st), Frances was living with her children and her marital status was listed as “widowed” (although William did not die until 1928).  By May 1920, Frances had married James Weaver Cole.

Clifford’s great-great grandparents were Jacob [Peter] and Elizabeth (Wright) Copple.  Jacob Jr. was the son of Jacob [Peter] Copple and Mary Elizabeth Garren [or Foutz?], who are also my ancestors.

Elizabeth (Wright) Copple was the daughter of Benjamin Wright and Barbara Morgan.  Benjamin was the son of Richard Wright and Ann [unknown surname], who are also my ancestors.

Glenn was in the military from Aug 1917 to July 1919, and after arriving home back in Centralia, was a lawyer.  He moved to Yuma, Arizona prior to January 1925, which is when he became the assistant District Attorney.

He married Janet Anne Burnell in 1934 in Phoenix, Maricopa County, and they had a son Gordon Burnell in April 1936 in Los Angeles County, California.  The family was back in Yuma County, Arizona as of the 1940 census.  Glenn died in Oct 1965, presumably in Arizona, but is buried in San Diego County, California.  His widow died in 1982, and his son Gordon died in 1987 at the age of 51.

His parents were Lemon Copple (c 1837 – c 1888) and Elizabeth (Daniels) Copple, who married in 1865 in Douglas County, Kansas.  He married Jeanette Thomassen by 1916, when they were both living in Tulsa, Oklahoma.  (The article below references the fact that he was a Tulsa businessman.)  By 1920, he and his wife had 2 children, and were living in Indiana.  As of 1930, when this article was published and during the census enumeration, the family was living in Cass County, Indiana, which is where Logansport is.  Some time after 1942, he and his wife had moved to Tucson, Arizona, where he died in 1949.

James’ father, Lemon, was likely the son of Jacob Copple and Malinda Everman.  After that, it gets unclear.  There are numerous Jacob Copples and John Copples (the possible grandfather of Lemon) which are not clearly sorted out by most Ancestry.com users.  But many Ancestry trees have Lemon in Illinois or Indiana, whereas he was clearly — at least according to the Federal Census records — in Kansas.

Flora (Young) Copple (1869 – 1954), the wife of Claude Eugene Copple  — likely my 3rd cousin 4 times removed — of Hood River, Oregon, was apparently fond of roses.  I clipped this article thinking that her rose bushes must have been a sight to see.  But it turns out that, rather than having a green thumbs, she was in fact, skilled in paper artistry!  (Check out the third paragraph!)

This newspaper clipping appears to be about the estate of the late Samuel Copple (c 1824 – c 1852) of Marion County, Illinois.  Samuel was one of at least 11 children born to David [Allen] Copple & Lavina Huckleberry who resided in Marion County, IL late in their lives.  David was likely the son of Jacob [Peter] Copple and [Mary] Elizabeth Garren (or Pfouts), and thus would have been a brother to my own ancestor Philip (c 1784 – 1850).

Judging from the 1830 and 1840 census records, and the land patent images available at BLM’s online site, it appears the Copple family moved to Illinois when Samuel was about 15 years old, stopping in the Jefferson/Marion County area. (Both counties are adjacent to each other, Marion having been created from part of Jefferson in 1823.) [1]

Sam married Maria Railey in January 1847; they had 2 daughters: Ellen and Sarah.  Sam died at about the age of 28, and his widow married Abner Faulkner within a fairly short time.

Eli Copple is listed as the Administrator of Sam’s estate; Sam had an older brother Eli, who also lived in Marion County, Illinois. 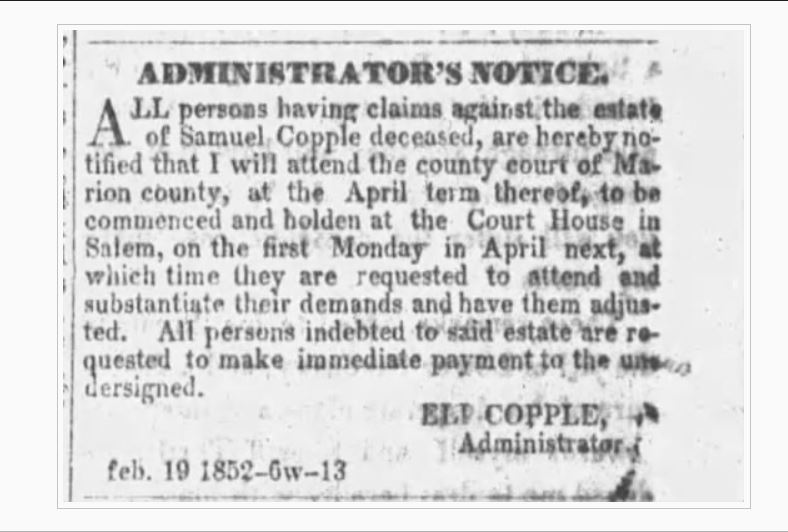 As indicated in the article, Thelma Irene married Lawrence Marion Selsor  (1911-1972) in Jonesboro on July 24, 1942.   Thelma worked at the (local?) air base, while Lawrence was with the Works Project Administration.  They took a honeymoon to Memphis, Tennessee.

A quick search for Thelma Selsor on Ancestry’s page for U.S. city directories (1822 – 1995)  seems to indicate that the Selsors made their home in Jonesboro, Arkansas, after they married.

I did not do enough research on Thelma to determine if she had children.  However, it appears her paternal grandparents were Levi and Malinda (Dobbs) Copple and her great-grandparents were William and Abigail (Handley) Copple.  William’s parents were both Copples, being cousins to each other, and Thelma was likely my 4th cousin 3 times removed.